We have endless responses to threats against our lives.

Kara Walker
Walking through "Kara Walker: My Complement, My Enemy, My Oppressor, My Love" last night was definitely a defining moment of my year. 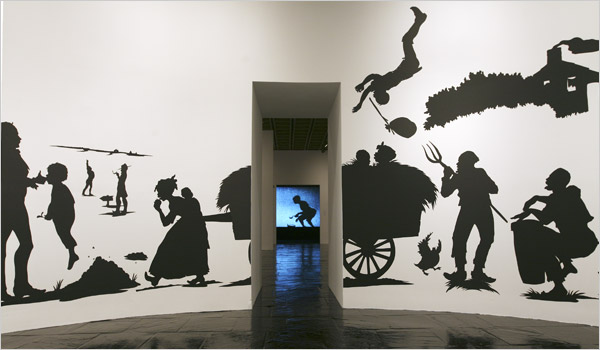 Even though I went with K, I quickly forgot about him being there. I had no intentions of following anyone's pace but my own and I was trying to avoid the guided tour. He recognized my solace, manned up, and braved the images and words on his own. He'd never heard of her. I think he had a hard time being comfortable. We crossed paths a few times, he'd kiss my forehead and keep walking, as I continued staring up at whatever was on the wall. Afterward, he told me the exhibit angered and aggravated him because the silhouettes are so obscene and volatile. I asked him don't they have the right (art & "rights".. ha!) to be that way, since the history on which they are based upon is obscene and volatile.

It's the first exhibit of hers that I stepped into and just took it as it came, saw each silhouette as it's own story, instead of trying to make complicated connections between each and every one (maybe because those connections were clear as day this time around) or write my own profound statement on top if it. I hadn't seen the shadow puppet films before. And I was delighted to see Do You Like Crème in Your Coffee and Chocolate in Your Milk? & Slavery! Slavery!, the former speaks volumes about the pervasive need to strip us (black women) into a one-dimensional illusion; the latter is just overwhelmingly powerful. I left feeling proud, reminded of the ways in which we have retaliated against whatever seeks to destroy us Black women. I'll probably go back, truly on my own, with a journal, on a day when the museum is mostly empty.

I've just finished reading the story about Alexis Goggins, who was shot six times trying to protect her mother from an ex-boyfriend. I am so relieved she is alive and in stable condition, but I admit I was expecting to hear, without surprise, she had died. I'm praying for her. No time to point fingers.

Her case, the cases of Ebony and Daniyah and Nixzmary, leave behind so many questions. All of us have got to do better for these kids. Why do we let ourselves forget how natural it is for our children to love us and protect us and model themselves after us? We need to return that blessing.